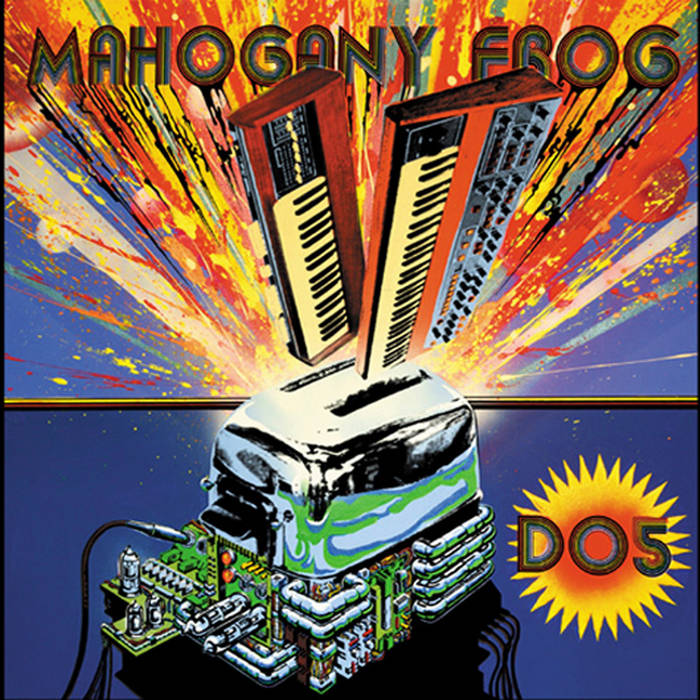 ahogany Frog's "Do 5" is the fifth full-length release from this Winnipeg-based outfit. Over the past decade the group has been saturating their own brand of psychedelic jazz-rock, an instrumental brew that is hard-hitting, challenging, experimental and noisy, but catchy as hell. "Do 5", the most cohesive Mahogany Frog album to date, and it seems that the four members of MF are on a crusade to change the way people listen to music. Melodic, harmonized leads slice through lush walls of thick, warbling, tube-driven vintage organs and analog synths. Snarling, feedback-ridden guitars riff hard in unison with a punchy, fuzzy bass. Amplified glitch-esque electronic beats melt into sporadic, frantic drumming. The themes progress quickly, and the instruments change roles often. Teaming up with Winnipeg recording wizard/producer Mike Petkau, the recording process in itself was a bit of an experiment. Recorded over seven months during the winter of 2006/2007 at MCM Studios, the band gave themselves the liberty to take their time and try some new things. Petkau, who's methods were somewhat familiar to the band (he had engineered the Frog's previous two releases "On Blue" and "Vs Mabus") was open to trying unorthodox mic setups and amplification techniques, using the unique room (which is typically used for acoustic/choral recordings) to it's potential. Everything was amplified full-tilt through a collection of vintage tube amplifiers, from the synths and guitars to electronic beats and acoustic percussion. The result is a heavy, explosive album that sounds like combusting vacuum tubes and tearing speakers, a hot, dirty trip through countless musical ideas. It is a record that fully captures all the elements involved getting pushed to their limit, from the personnel to the equipment... and the listener hearing it.

Artist Profile: Mahogany Frog is a recording/touring band. The music draws influence from an array of genres: electronica, progressive rock, jazz, late 50's "ultra" lounge, ambient/experimentalism. With the use of a plethora of keyboards (both analogue & digital), feedback-ridden guitars, fuzz-bass and walls of electronic samples, the group creates a tube-saturated, highly overdriven jazz-rock, usually performed at extremely high decibels and with an enormous amount of energy. The music itself can be both challenging and soothing to the listener: stabbing riffs using unusual notes and time signatures often dissolve into lush electro-soundscapes, and straightforward, rhythmic interludes can merely lay the foundation for syncopated counter-melodies or sound effects. The orchestration of the instruments are unorthodox at times: using complex modal progressions or phrases as a basis for experimentations in arrangement, the rhythm and lead sections trade roles quickly and often. Musically speaking, the four members of Mahogany Frog have the tendency to spread themselves thin, as they attempt to tackle slicing leads and warm backdrops simuntaneously. Live, the songs all flow together, creating a steady bombardment of highly progressive, exciting music that explores countless moods and ideas.

Bandcamp Daily  your guide to the world of Bandcamp

Featuring Oakland sounds from the Smart Bomb collective and Samplelov.